You can create your own schematics to operate on Angular projects. Library developers typically package schematics with their libraries in order to integrate them with the Angular CLI. You can also create stand-alone schematics to manipulate the files and constructs in Angular applications as a way of customizing them for your development environment and making them conform to your standards and constraints. Schematics can be chained, running other schematics to perform complex operations.

Manipulating the code in an application has the potential to be both very powerful and correspondingly dangerous. For example, creating a file that already exists would be an error, and if it was applied immediately, it would discard all the other changes applied so far. The Angular Schematics tooling guards against side effects and errors by creating a virtual file system. A schematic describes a pipeline of transformations that can be applied to the virtual file system. When a schematic run, the transformations are recorded in memory, and only applied in the real file system once they're confirmed to be valid.

The public API for schematics defines classes that represent the basic concepts.

The context object passed into a rule provides access to utility functions and metadata that the schematic may need to work with, including a logging API to help with debugging. The context also defines a merge strategy that determines how changes are merged from the staged tree into the base tree. A change can be accepted or ignored or throw an exception.

When you create a new blank schematic with the Schematics CLI, the generated entry function is a rule factory. A RuleFactory object defines a higher-order function that creates a Rule. The code snippet below illustrates more.

See the Pen RuleFactory by w3resource (@w3resource) on CodePen.


Your rules can make changes to your projects by calling external tools and implementing logic. You need a rule, for example, to define how a template in the schematic is to be merged into the hosting project.

Rules can make use of utilities provided with the @schematics/angular package. Look for helper functions for working with modules, dependencies, TypeScript, AST, JSON, Angular CLI workspaces and projects, and more.

See the Pen Uses if Rules by w3resource (@w3resource) on CodePen.


Defining input options with a schema and interfaces

Rules can collect option values from the caller and inject them into templates. The options available to your rules, with their allowed values and defaults, are defined in the schematic's JSON schema file, <schematic>/schema.json. You can define a variable or enumerated data types for the schema using TypeScript interfaces.


Schematics come with their own command-line tool. Using Node 6.9 or above, install the Schematics command line tool globally:

In the following sections, we will create a new schematics collection using the CLI in order to introduce the files and file structure, and some of the basic concepts.

The most common use of schematics, however, is to integrate an Angular library with the Angular CLI. You can do this by creating the schematic files directly within the library project in an Angular workspace, without using the Schematics CLI.

The following command creates a new schematic named hello-world in a new project folder of the same name.

Go to the collection folder, install your npm dependencies, and open your new collection in your favorite editor to see the generated files. For example, if you are using VSCode:

The initial schematic gets the same name as the project folder, and is generated in src/hello-world. You can add related schematics to this collection, and modify the generated skeleton code to define your schematic's functionality. Each schematic name must be unique within the collection.

Use the schematics command to run a named schematic. Provide the path to the project folder, the schematic name, and any mandatory options, in the following format.

See the Pen Running a schematics by w3resource (@w3resource) on CodePen.


The path can be absolute or relative to the current working directory where the command is executed. For example, to run the schematic we just generated (which has no required options), use the following command.

Adding a schematic to a collection

To add a schematic to an existing collection, use the same command you use to start a new schematics project, but run the command inside the project folder.

The command generates the new named schematic inside your collection, with a main index.ts file and its associated test spec. It also adds the name, description, and factory function for the new schematic to the collection's schema in the collection.json file.

The top level of the root project folder for a collection contains configuration files, a node_modules folder, and a src/folder. The src/ folder contains subfolders for named schematics in the collection, and a schema, collection.json, which describes the collected schematics. Each schematic is created with a name, description, and factory function.

See the Pen Collection contents by w3resource (@w3resource) on CodePen.


The $schema property specifies the schema that the CLI uses for validation.

In addition to the name and description, each schematic has a factory property that identifies the schematic's entry point. In the example, you invoke the schematic's defined functionality by calling the helloWorld() function in the main file, hello-world/index.ts. 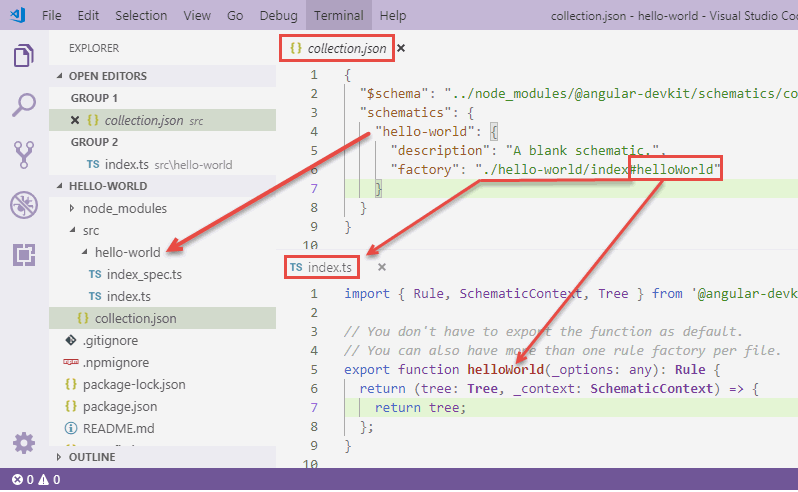